Inspired by the video game competition depicted in the climax to The Wizard (which itself introduced us to Super Mario Bros. 3), Nintendo held their first Nintendo World Championships in 1990. That competition toured twenty-nine cities across the USA and was based upon scoring points within three games featured on a customized Nintendo World Championships 1990 NES cartridge: Super Mario Bros., Rad Racer, and Tetris. Ninety regular, grey copies of that cartridge were handed out to finalists after the competition, with an additional twenty-six gold (ala The Legend of Zelda) versions of the cartridges given out as prizes through Nintendo Power--becoming one of the most highly sought after NES cartridges in the collector's market! 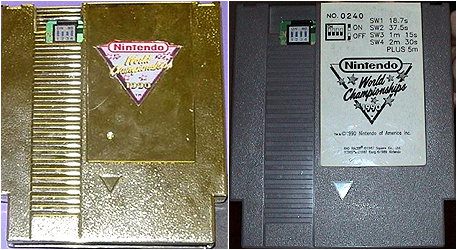 Fret not if you feel that you lost out never having been able to take part in that Nintendo World Championships way back in 1990, because it is long last returning after a twenty-five year hiatus! Qualifying rounds for an all new Nintendo World Championships will be held at Best Buy locations around the USA on May 30 2015! Regional winners will then proceed onward to the championship itself, held in The Nokia Theatre, L.A., Cali-i-forn-ia on June 14 2015! (Call it hunch, but I don't think that Lucas will be invited back this year!)

What are everyone's thoughts about the return of the Nintendo World Championships this year? What do you think they should do this time? What games should they feature this time around? I'm not sure how many games in total would be featured in this new championships, but I definitely think that Mario Kart and Super Smash Bros should be two of them!

(I wasn't sure where I should post this, and ultimately decided that the NES category was the best option given that Nintendo World Championships 1990 was strictly a NES affair.)

I think it's going to be a big hit and should help out immensely with sales of everything Nintendo. Sound like a marketing ploy to get the word out that NX is coming.

Glad to see Nintendo bringing this back, should be pretty event.

And I would love to get my hands on one of those classic NES cartridges, I could easily auction one off for a lot of money.

The whole notion of a competition to see who is better at playing Nintendo games reminds me of Milhouse's semi-famous line from The Simpson's episode Lemon of Troy: "I'll kick you butt! ...uh, at Nintendo." These Nintendo World Championships are the perfect opportunity for him to prove that he isn't all talk!

There's also something rather silly about a "World" Championship that tours and is held strictly within the borders of the USA--but Nintendo are hardly alone on the offense, consider baseball's "World" Series as well, for example!
You must log in or register to reply here.
Share:
Facebook Twitter Reddit Email