The Nintendo Knitting Machine: Now You're Knitting With Power!

Perhaps the oddest of Nintendo's numerous accessories for the Famicom and the NES--much more out-of-left-field and thinking-outside-the-box than the Power Glove or even R.O.B.--was the truly bizarre Nintendo Knitting Machine! An accessory that let the Nintendo fanboys and fangirls of the eighties "print" out knitted sweater designed on their Famicom/NES! 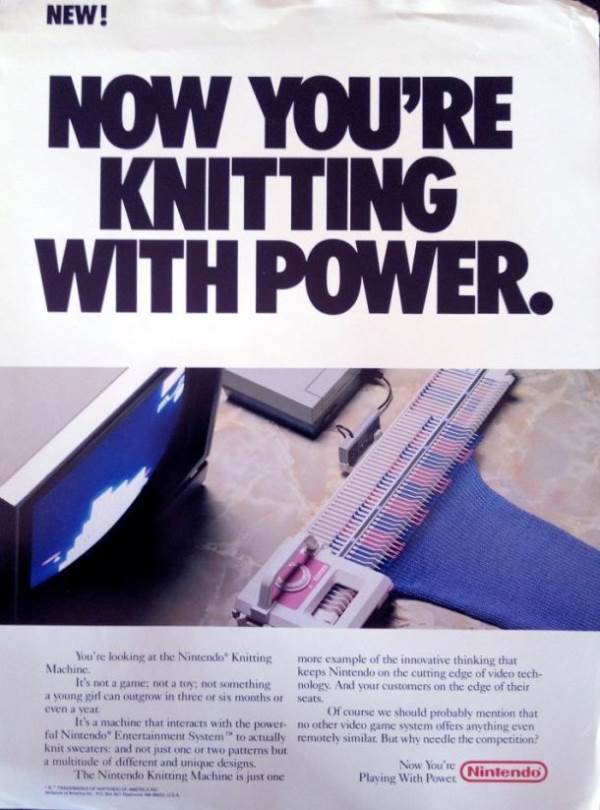 I Am a Teacher: Super Mario Sweater is an example of the software that accompanied this rather creative hardware. It allowed "players" to design sweaters featuring Super Mario Bros characters, which would then be "printed" by the attached Nintendo Knitting Machine!

Can you imagine the unprecedented virtual reality experience that could have been if only the Knitting Machine were compatible with the Virtual Boy? "Wow, it's like I'm really knitting!! Just like Grandma!!"

Part of me wants to laugh, but I seriously want one of those printers... I mean... It printers sweaters. It PRINTS sweaters. IT PRINTS SWEATERS!!!!11!@1! Seriously if they came out with one of those tomorrow I would literally throw my money at them while doing a jig. And I am okay with that.
You must log in or register to reply here.
Share:
Facebook Twitter Reddit Email